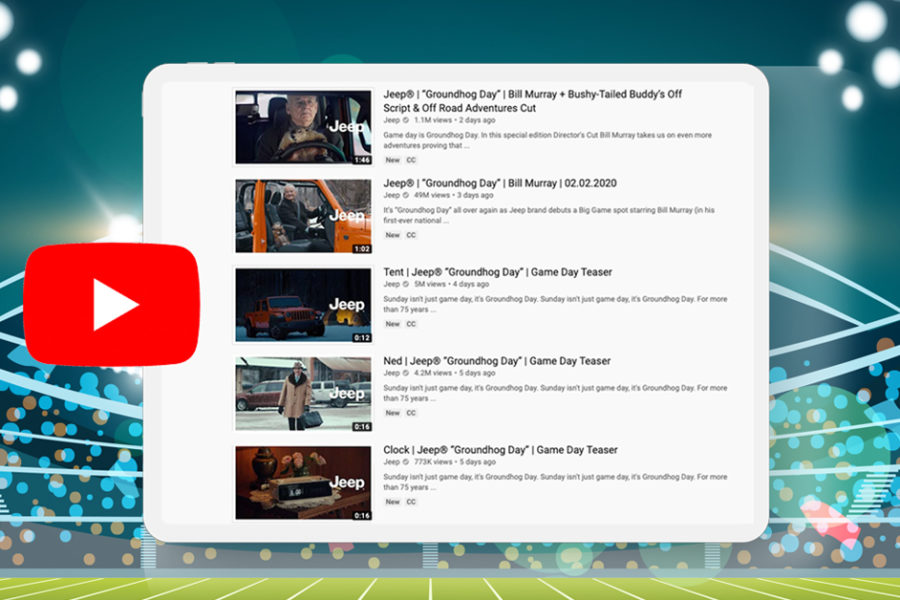 
With linear tv viewership declining and streaming on the rise, marketers are turning to a different metric for success than ratings and gameday eyeballs when planning their Super Bowl ad campaigns. Join us as we dissect how top-performing brands utilised Youtube and social media channels to maximise their $5M ad slots for Super Bowl 54.

As the digital advertising revolution continues, one area where television has always been able to claim their supremacy is during major sporting events – notably the Super Bowl. Having some of the most expensive advertising slots in existence with one of the most massive audiences every year commands colossal bragging rights.

Over the past few years, consumption trends have changed the game. TV commercials are not the primary influence driver for brands placing ads anymore. Shock Top CEO James Kirsch once went so far as to claim that “more important than our Super Bowl commercials were the digital elements surrounding the campaign” in an interview with Google.

The rise of streaming and the change in consumer intent

Linear TV, where viewers primarily watch the famous Super Bowl Ads, is declining. According to Nielsen, the number of football fans tuning in from their televisions decreased by over 5% from last year, which is the smallest audience the big game has garnered since 2008.

However, thanks to a 20% increase in unique devices tuned in to the big game, viewership across all platforms, including streaming and digital, set a record year for the most massive audience in Super Bowl history.

A study last year by Techcrunch identified that fewer than half of the viewers were tuning in to watch the actual game. 27% showed up to hang with friends and watch the halftime show, and a whopping 23% were primarily interested in the infamous Super Bowl commercials.

This data presents an opportunity for advertisers to tap into one of the most massive audiences ever with a personalised experience and to drastically extend the shelf life of their super bowl campaigns beyond the 30-second commercial.

Digital share of voice is the new measurement success for ad campaigns since the rise of digital channels. Using digital activity on social media, search engines, and internet video providers, marketers can assess how much an ad resonates with viewers before, during, and after the big game. Brands measured if they reached and influenced viewers with their campaigns by turning to social media for engagement indicators (such as likes, comments, hashtags, and shares).

iSpot TV, using digital share of voice, calculated that Jeep garnered almost 15% digital share of voice with nearly 75,000 total social actions. Although most eyeballs did not see this ad on TV, Jeep leveraged an active pre and post-game social and video strategy to amplify their Jeep Gladiator spot. They generated user engagement through the hashtag #jeepgroundhogsday, and promote their star celebrity spokesperson Bill Murray well ahead of game time.

If there’s one lesson we can take away from the super bowl this year, it is that with significant challenges come great opportunities. When consumption trends change, your metrics for success must change with them to drive the success of your marketing efforts.

With TV viewership declining, advertisers found a solution to ensure their efforts are working. Nowadays, it takes more than just one creative and high-priced commercial to truly stand out. By identifying engagement metrics to measure the digital share of voice, brands like Jeep were able to migrate from one advertisement that lasts 30 seconds to a full week-long experience that continues to reach and influence audiences well after the game day.

This particular Sunday is special, but not because today’s match in Miami determines the nation’s best football team. Nor is it special because everyday Americans put their differences aside and come together.

I’m currently standing in a 16th floor conference room in an office building not far from Times Square in Midtown Manhattan. Tonight it’s a war room, made up of 40 people all supporting one brand with multiple spots in today’s big game. That brand is Tide. Most all of them are from Procter & Gamble’s Woven agency, which is a hybrid of PR and creative teams. The goal of the night: amplify Tide’s message across social media. Get attention, and make sure that attention is positive.

Snacks and drinks are everywhere. Popcorn, mixed nuts, Doritos, tiny snickers bars, Coke, Sprite, Corona Extra. In the kitchen, just adjacent to the war room, is a buffet of make-your-own Chipotle. There’s also a green cake meant to look like a football field.

Throughout the evening, I see one woman wearing a red Tide shirt, and another in a blue tide shirt. Absolutely no one is wearing anything that identifies them as a fan of either the Kansas City Chiefs or the San Francisco 49ers.

When I show up, around 5:30, they’re doing final checks. They’ve spent months preparing, and have an arsenal of GIFs and copy in preparation for almost any scenario imagined, all outcomes. Like the game itself, the outcome of how the public perceives and reacts to their campaign isn’t pre-determined. Molski, Wormington and Maxwell are here to make sure Tide wins.

But, what could go wrong? Tide is the leading laundry detergent brand in the nation, according to market research firm Euromonitor. The campaign is shot, edited and ready. And it’s not like Shakira is going to eat a Tide Pod during the halftime show. If anything, Maxwell tells me, her biggest concern is living up to the standards set by Tide’s latest campaigns, Laundry Night and It’s a Tide Ad.

“You guys ready?” asks Jenny with enthusiasm. “Here we go!”

For what feels like the first time since I arrived, the room approaches something close to quiet. Everyone is staring at a screen, whether it’s a laptop, smartphone, or one of the three TVs. I can distinctly hear someone crack open a can of something in the kitchen behind us. Someone’s toddler is slowly walking around the room.

President Trump will officially be a part of Fox’s Super Bowl Sunday programming ahead of the Big Game.

He will be sitting down with Fox News Channel’s Sean Hannity on Sunday, Feb. 2, in advance of the game. The interview is scheduled to air on Fox at 3:30 p.m. ET, during the network’s Super Bowl pregame show.

Hannity’s interview with Trump won’t be live; instead, it will be taped earlier in the day at the White House.

While the pre-Super Bowl presidential interview has been a Super Bowl Sunday staple, Trump skipped the practice in 2018, when NBC aired the game. Before last year’s Super Bowl, which aired on CBS, he spoke with Margaret Brennan of CBS News’ Face the Nation. And Trump sat down with then-Fox News host Bill O’Reilly in advance of the 2017 Super Bowl on Fox.

Additional portions of the interview with Trump will be presented on Hannity’s Fox News program—which is called Hannity— the following evening. After Monday’s edition of Hannity, the entire discussion will be available online at FoxNews.com.

Hannity told Variety that he intends to ask Trump about the Senate impeachment trial, the economy, the death of Iranian general Qasem Soleimani, and which team he thinks will win the Super Bowl.

In addition to his interview with Hannity, Trump will also pop up during the Super Bowl itself: His re-election campaign has purchased an ad that will air during the game.